Is it safe to get a vaccination when you are pregnant? The conservative answer is "no", but there may be degrees of danger for each different vaccine. Given the testing used by pharmaceutical companies, and the general practice of excluding pregnant women from pre-licensure clinical trials, it's not possible to establish with certainty how safe - or unsafe - various vaccines are for fetal and maternal health. So this month I will look at VAERS to see which vaccines have the most reports involving pregnancy. 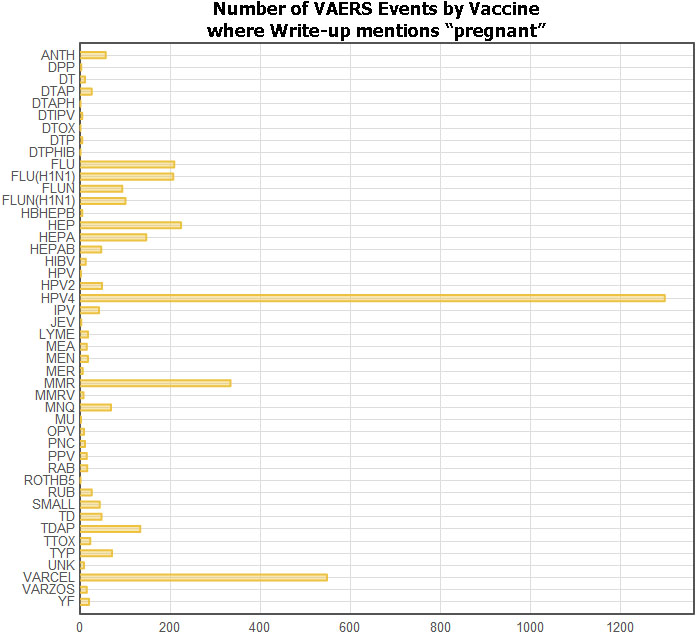 The worst offender, by a large margin, is Gardasil (HPV4). It's important to note that many childhood vaccines are given before it is possible to be pregnant, so only those vaccines given to older people will show up here. Indeed, there are spikes around the Flu and Hepatitis vaccines which are given to older people. But even if we look at just Gardasil and Flu, the Gardasil spike is significant because many more people get Flu vaccines than Gardasil. And the comparison of Gardasil to Flu is even worse when you consider that this graph shows data from the entire 20+ years of VAERS reporting, but Gardasil has only existed for five years. This means that Gardasil, which is associated with 5 times as many pregnancy-related VAERS reports as the Seasonal Flu, in 1/4 the number of years, appears to be 20 times as dangerous as Seasonal Flu.

Also of interest is the fact that the number of VAERS reports is the same for both Seasonal Flu (FLU / FLUN) and H1N1 Flu (those with "H1N1" in their name). But again, the Seasonal Flu data accounts for 20 years of reporting whereas the H1N1 Flu was identified separately in the VAERS data for just 1 year. Could the H1N1 Flu vaccine have done 20 times as much damage to pregnant women as the Seasonal Flu vaccine? My November, 2010 blog has something to say about that.

The results seem pretty damning for Gardasil and the H1N1 Flu vaccine. But what about the initial question concerning the validity of the search...does typing "pregnant" into the Write-up field really find pregnant women? To find out, there is a new analysis feature in MedAlerts which shows the context of a Write-up search, so you can see the surrounding words. To use this feature, check Expert Mode, make a Table of Write-Up Context (3 words), and search for the Write-up term "pregnant". Also, select the Vaccine "HPV4". This will analyze only those Gardasil-related reports that have "pregnant" in their Write-up.

Only one of these shows that the patient was not pregnant, and that happens only 4 times in the data. Two other contexts refer to someone who became pregnant after the vaccination, but this may still be relevant. A complete examination of the results shows that 66 out of the 1290 matches suggest a patient who was not pregnant. This is just 5% of the results and is not significant-enough to invalidate the graph.

So if you are pregnant (or even think you might be pregnant) talk to your doctor and other health professionals before getting a vaccine, especially Gardasil or the current Flu vaccine which has the H1N1 serum in it.